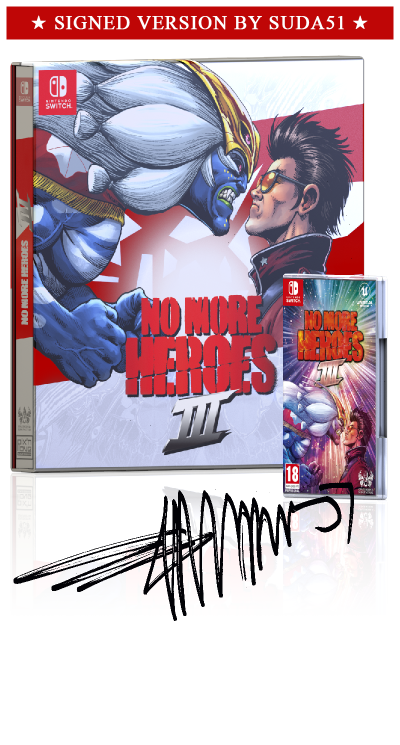 No More Heroes III unveiled in a Deluxe edition signed by SUDA51 and numbered at 999 copies for Nintendo SwitchTM.

This edition signed by SUDA51 and numbered at 999 copies include:

In exclusivity, Grasshopper Manufacture and Pix’n Love are happy to present you the game No More Heroes III for Nintendo Switch in Limited Collector’s Edition.

Latest installment of the famous saga launched in December 2007 on Wii, No More Heroes III stands as the rightful  representative of the « punk » spirit so dear to its creator: Gôichi Suda, aka SUDA51. Surprising, quirky, sarcastic, oddball, Travis Touchdown and its eccentric universe stand one more time as the flag bearers of an accepted and refreshing off-the-wall-ness!

Beyond its intention and many pop culture references, the No More Heroes franchise also stands out with its bold art direction, as numerous artists of international fame take part in. From the No More Heroes trilogy to the Travis Strikes Again spin-off, Grasshopper Manufacture and Pix’n Love offer you to extend the game experience by discovering the unique universe of SUDA51 through an unpublished and richly illustrated artbook.

About No More Heroes III for Nintendo SwitchTM

More than 10 years after his latest adventures in No More Heroes: Desperate Struggle, the wild Travis Touchdown goes back to work. Back to Santa Destroy after his exile voluntary exile, the former high-ranked assassin of the UAA is ready to confront an army... of aliens! Their goal? Conquer Earth! The most outlandish hero in the universe didn’t need more to take out his elegant « Beam Katana » once again!